How to read a Contraction Monitor: Guide for Expecting Mothers

You are here: Home / Moms' Guides / How to read a Contraction Monitor: Guide for Expecting Mothers

Taking care of the mother and baby by measuring baby’s heart rate during labor and contractions is a vital procedure in OB-GYN around the world.

Before the 1970’s a fetoscope was used to monitor the fetal. This procedure was carried out by using a special stethoscope designed exclusively for pregnancy. Doctors would listen to the heart beat by putting the stethoscope on mother’s belly. The heart beat would give an idea of how the baby was coping with labor and contractions. This process is called fetal monitoring.

Electronic fetal monitoring came after the 70’s. Like all other medical developments, this too went through some rigorous tests carried out for reliability. It provides a graphical illustration of baby’s heart rate with every contraction the mother experiences and hence helps the staff keep a record and do procedures accordingly. This process is known as CTG (Cardiotocography).

It involves not only a continuous tracking of fetal heart rate to check his wellbeing but also monitors and assesses uterine activity. CTG is also sometimes called as EFM (Electronic Fetal Monitoring).

Pattern recognition is the basis of fetal CTG. This also leads to the difference in opinions of various OB-GYN or clinicians. Computerized CTG however is more efficient and reliable and also more objective and consistent.

The mother is placed in a semi-recumbent position or in a left lateral. This saves her from the compression of maternal vena cava. Two transducers, each attached to a belt are placed on the abdomen.

One transducer acts as a stretch gauge (pressure sensitive contraction tocodynometer) and measures the uterine activity while the other makes use of ultrasound and the Doppler Effect to measure the motion of fetal heart beat. It also detects the interval between each beat hence provides a continuous assessment of the fetal heart rate.

Two graphs are obtained in one session of monitoring which lasts for at least 30 minutes. These graphs each have readings and indications, one line on the graph shows a tracing of fetal heart rate while the other line on the same graph shows a tracing of uterine activity (which correlates with internal uterine pressure and indicates contractions).

The mother is also provided with a button to press if she wants to record any fetal movements.

There are certain features in CTG that are important to define normality and identify abnormality and potential concerns for the fetus. Fetal hypoxia, for instance,  is a pathological occurrence and it changes the signals which is shown as a variation in cardiac response on the monitor. These features include:

There are certain risk factors that vary from patient to patient. For example fetal anemia of FGR is an issue that most mothers face during pregnancy and child birth. Hence any variations in readings on the monitor will be considered as a guideline for the issue that the patient has in record.

The normal value is between 110-150 beats per minute (bpm). If the rate is higher, it is called as fetal tachycardia and if the rate is lower it is called fetal bradycardia. 5 to 10 minutes is the period to calculate baseline rate.

It is considered abnormal when the value is less than 10 bpm. Fetal sleep states, hypoxia and fetal activity are key elements that could modify baseline variability.

The CTG can show positive and healthy sign of the fetal growth by displaying increase in baseline rate. If there is an increase of 15 bpm which last for 15 seconds or there is presence of two or more accelerations on a 20-30 minutes antepartum fetal CTG shows a reactive trace which is a sign of healthy, non-hypoxic fetal.

The reverse signals on monitor show a hypoxic fetal i.e. if there is a decrease of 15 bpm in fetal heart rate that lasts for longer than 15 seconds. 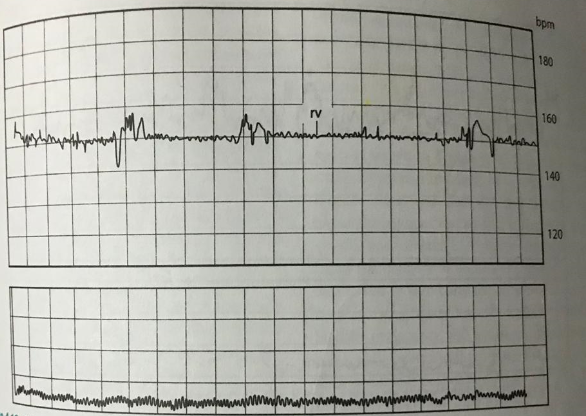 Fig: A fetal CTG showing baseline rate of 150 but with reduced variability 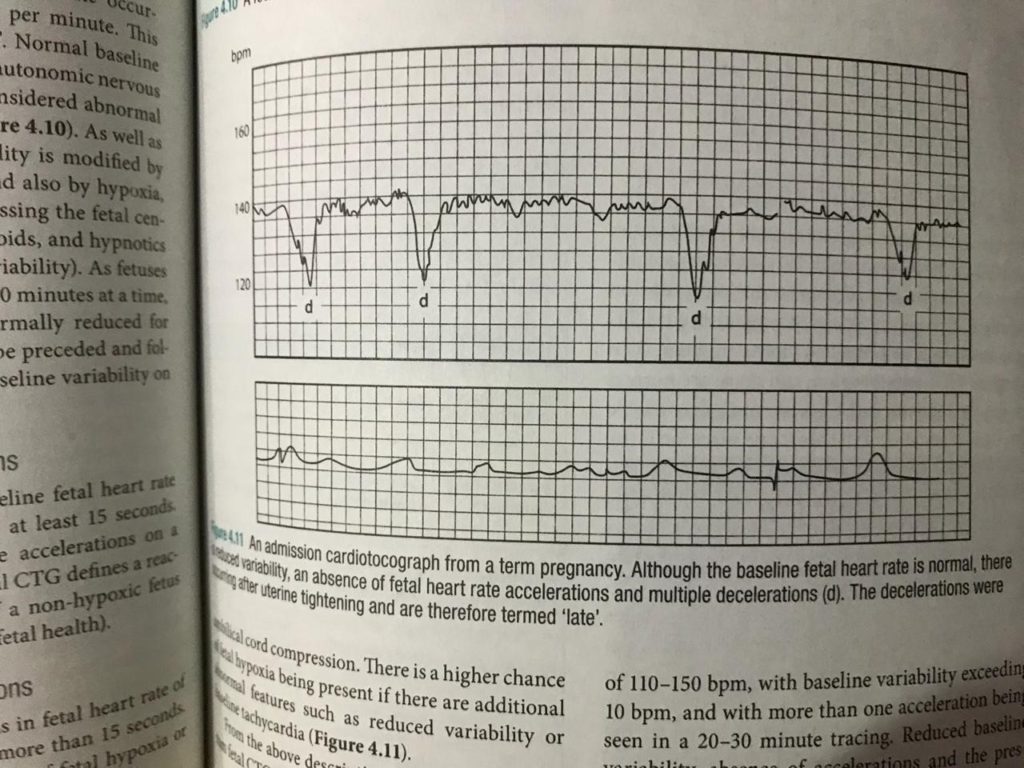 Every woman is different and will record different experiences. Not every 30 minute graph records same measurements for every woman. There are certain factors such as women who have had epidural, an induction of labor, have multiple babies or women with other medical problems will each require different monitoring timing and sessions. Women with high risk labor for example will require a continuous monitoring. CTGs are still a great way to monitor the fetal well-being and helps take necessary actions in time. It has become an essential staple for delivery in hospitals and has helped saved many lives.

Being a mother of four zestful kids, Jennifer Hill started TheMummyCenter as she wanted to share her extensive parental experience with all those moms or dads who’ve already entered parenthood or are about to enter one. Jennifer realizes the importance of having the right baby products at your home, which is why she reviews products she has personally experienced.

Get the latest posts delivered right to your inbox